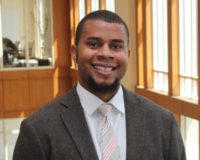 Christan Grant is an Assistant Professor, University of Oklahoma and the Tapia 2020 Deputy Scholarship Chair. We spoke with Christan about his life in computer science and how he discovered the Tapia Conference.

Tell me about your background.

I was born in Miami, Florida and grew up in Broward County South Florida. My parents are from Jamaica, my Dad was a software engineer and my Mom worked for an insurance company. I watched them both work really hard, raised three kids. They just made it to retirement this year, I’m really happy that they have the opportunity to relax and explore some new ventures.

Tell me how you became involved in Computer Science.

I always figured a software job was something I could do. On days I was sick, would go to work with my Dad and hang out under his desk and play on the extra computer in his office. Computers were always a part of my life. But, I got really excited about computer science from all the cartoon propaganda of the 80’s and 90’s. The Ninja Turtles, Transformers and Power Rangers all would have a leader, a comic relief, a fighter and someone who was the tech person. I wanted to be all of those things a so I worked on being a ninja and inventor and a scientist. Growing up I was very active in Tae Kwon do and got my junior black belt, so I have my ninja card. I did an internship at IBM Almaden, I filed and received a patent, so I got my invention. And now with my PhD, I am working as a scientist.

I took my first programming class in 9th grade. I liked how it made me think — we had to use the tools of the Scheme programming language to solve different puzzles. Programming was a fun challenge. I took courses in high school every year after that. I went to the University of Florida and majored in computer engineering, encouraged by my dad. The engineering program had a summer freshmen introductory program called STEPUP that did a great job explaining the possible career pathways for engineers. I did an internship with a Defense Contractor and tried the 9 to 5 life. In the first week I was gifted a liter-sized coffee cup and told this was what everybody used to make it through the day. It was a good experience, but I knew the doctorate would give me more freedom to decide the problems and times that I work on.

I was told I needed to do undergraduate research to go to grad school, so I looked for research opportunities. I looked for approachable professors and I thought the group of database faculty seemed to be the coolest. Since I was taking a database course, I asked Professor Joachim Hammer if there was something I could do he asked for my resume and brought me on to one of his projects to write example code. As the Masters students I was working with graduated, he gave me more research I had the opportunity to do more work. In one of my projects I built a prototype that was presented at a SIGMOD Conference. I was so excited by meeting so many inspiring professionals. I received a LSAMP Bridge to Doctorate and NSF Graduate Research Fellowship and continued my research at the University of Florida. When I graduated, I knew I had the choice of industry vs academia. I decided to pursue an academic career and joined the University of Oklahoma. It worked for both myself and my wife who was studying to be a dentist, it was a good place for her to get licensed and credentialed.

What are you working on today?

My focus continues to be on data management including database problems, analyzing data, and developing interfaces between humans and data systems. I also let my students drive the directions of my research. One area is looking at how visual privacy leaks occur on social media and smart cities. We are using computer science to ask questions concerning several issues including representation and bias.

How did you become involved with the Tapia Conference?

I was interested in research and graduate school and at the University of Florida I never had a Black professor, and I also hadn’t had any teachers who looked like me, other than coaches in high school. I began to wonder who was out there like me? I googled Black and Minority in CS. The Tapia Conference popped up. This was around 2007 and the conference was being held nearby in Orlando, Florida. The conference arranged for the attendees to do a Disney behind the scenes tour. While driving from the hotel to Disney and back I had the chance to ask senior grad students a ton of questions. I even asked them about whether I should propose and get married to my girlfriend, schools I should apply to, and a ton of other questions. They answered all of them! During the conference I met a lot of really inspiring people and got connected with great mentors.

Since that first conference I got married and we’ve had three children and I have only missed one Tapia Conference since. I’ve presented Birds of a Feather sessions, workshops and chaired the doctoral consortium. I feel it is very important to give back since the Tapia Conference really gave me the direction and validation that I needed. I was able to meet people who looked like me and learn how they were managing their lives as a Ph.D.

What advice do you have for students considering going to Tapia?

Attending a convention like Tapia is a great opportunity to get to know other people’s stories. Be sure to ask them how they made it to where they are today. Not everyone has followed the same path. Tapia is a great place to learn from other people’s mistakes and gather advice that will help you make great decisions about your future.